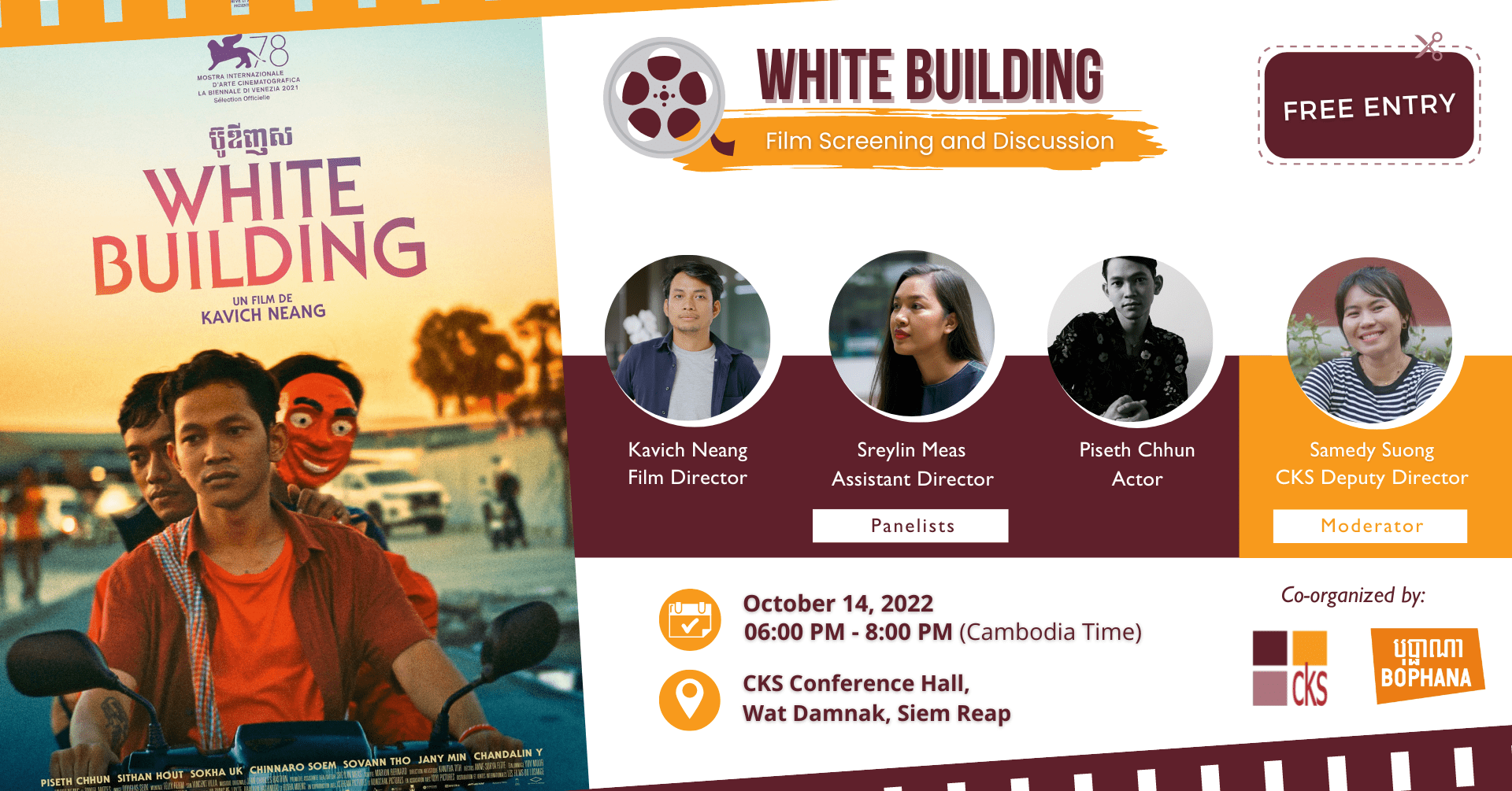 CKS and Bophana Center are delighted to host a screening and discussion of the award-winning film, White Building with Director Kavich Neang. “White Building narrates the story of a young man named Samnang who faces the demolition of his lifelong home in Phnom Penh and the ensuing pressures from family, friends, and neighbors.” Prior to the film, CKS Deputy Director Samedy Suong will discuss the film together with Kavich Neang, Sreylin Meas and Piseth Chhun. The film won three awards and received 12 nominations. The film will be in Khmer with English subtitles and the discussion will be in English.

*** This event is free for the public and seats will be reserved on a first-come first-served basis.

Piseth Chhun (b. 1996, Kandal, Cambodia) is an actor, dancer, and musician based in Phnom Penh. In 2012, he started out as a member of the dance crew D-Man, which has since evolved into a boy band under the management of Cambodian creative talent agency, Plerng Kob. Throughout that experience, the dance crew has choreographed and collaborated with many prominent events and artists of the musical industry in Cambodia, including Kmeng Khmer, Bonn Phum, Klahan9, and more. As an actor, Piseth Chhun first was cast by Kavich Neang for his 2018 short film New Land Broken Road, and was later cast in the leading role of “Samnang” in Kavich Neang’s 2021 feature film, White Building. He received the Orizzonti Award for Best Actor for this role at the 2021 Venice Film Festival, following the film’s world premiere.

Sreylin Meas (b. 1989, Phnom Penh, Cambodia) is an independent filmmaker and crew member, with over a decade of experience in the Cambodian film industry, working with both local and international crews. Since she began her career in 2009, she has worked in many roles behind the scenes: assistant director, production manager, line producer, location scouting, casting, and talent manager. She has also assisted on high-profile commercial projects, including the Louis Vuitton campaign in Cambodia with Angelina Jolie, and the scouting team for KONG: SKULL ISLAND. Other collaborators have included producer Nicholas Simon from Indochina Productions, Mexican assistant director Batan Silva, German cinematographer Martin Ruhe, Canal +, Arte TV, BBC, and the United Nations. She has worked with Anti-Archive as first assistant director for Dream Land (2015), Turn Left Turn Right (2016) and White Building (2021), as second assistant director and acting coach for Diamond Island (2016), and as location manager for Onoda – 10000 Nights in the Jungle (2021). As a director, she has thus far directed one short film, California Dreaming (2019), which won awards in Singapore and Lima, and multiple TV commercials and music videos.