What’s Love Got to Do with It? Forced Marriages During the Khmer Rouge Regime 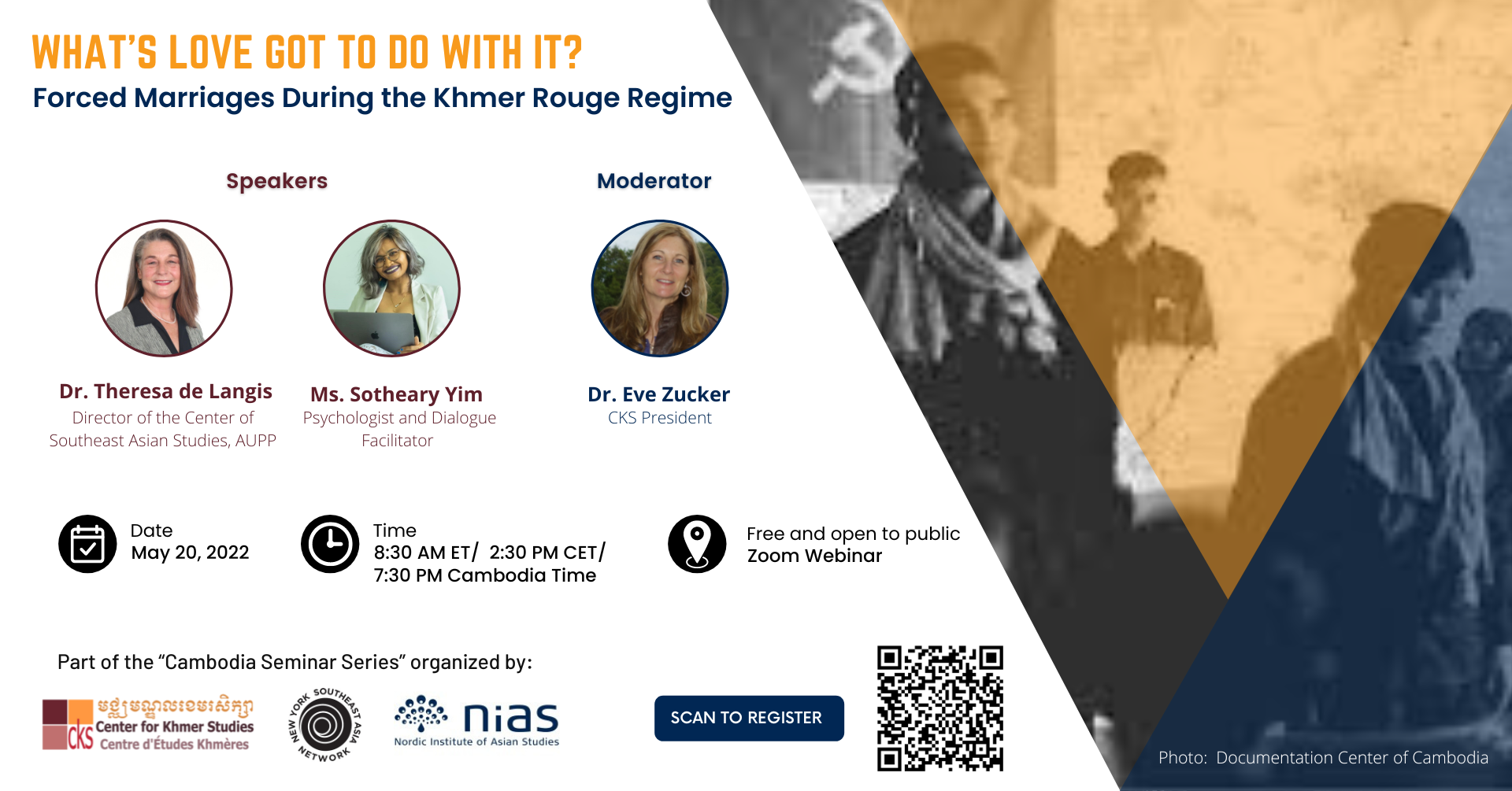 The crime of the “regulation of marriage,” prosecuted and ultimately convicted in the Extraordinary Chambers in the Courts of Cambodia (ECCC) in November 2018, is a case study in the dynamism of international criminal law as deeply embedded in historical processes.  This presentation will provide an overview of the efforts to have forced marriage investigated as a crime on a national scale against both men and women as part of the prosecutorial strategy of the ECCC, and of the historical significance of the conviction of this crime in Case 002-02. Canvassing the many Cambodian and international researchers and organizations involved in raising awareness of the topic, this presentation privileges the voices of survivors in painting a picture of the varieties of marriages forced on couples during the genocidal regime, even while pointing to the gendered power dynamics as the experience impacted men and women differently. The presentation will end by proposing a future research agenda, which speaks to the need for trauma-informed feminist methods that foreground love and care to fill in this still little-understood element of the mass atrocity and to share its effects with a younger generation.

This webinar is part of the “Cambodia Seminar Series” organized by The Center for Khmer Studies (CKS), The New York Southeast Asia Network (NYSEAN), and The Nordic Institute of Asian Studies (NIAS).

Drawing on two decades of teaching, research, and practice within government, the United Nations and academia, Dr. Theresa de Langis is the Director of the Center of Southeast Asian Studies and Professor in Global Affairs and Humanities at the American University of Phnom Penh. She completed her doctoral degree at the University of Illinois at Chicago in Literature and Gender Studies (2001) with highest distinction, and her teaching specializes in genocide and gender, especially in cross-disciplinary conversation with law, political science, literature, film and the humanities. Her research focuses on women’s human rights in conflict and post-conflict scenarios, and she is one of 125 individuals worldwide honored by the Gender Justice Initiative for its Legacy Wall at the International Criminal Court. Published in a variety of international scholarly journals and anthologies, her oral histories served as a partial basis for Pka Sla Krom Angkar, a classical Khmer Opera created by Sophiline Cheam Shapiro and composed by Sophy Him, which was named an official reparation by the Extraordinary Chambers in the Courts of Cambodia in its verdict for Case 002-02 on forced marriages. She is currently writing a book on sexual violence during the Khmer Rouge genocidal regime in Cambodia (1975-1979) based on original oral histories with survivors. These oral histories are now deposited for public access and historical preservation at the Tuol Sleng Genocide Museum in Phnom Penh, Cambodia. She has been a full-time resident of Phnom Penh since 2012.

Ms. Sotheary Yim is a psychologist and dialogue facilitator using creative methodologies, with extensive experience working directly with survivors of gender-based violence from the Khmer Rouge period.  Her work is at the intersection of trauma, healing and reconciliation, with a specific focus on resilience and growth. She is the co-creator of the Sneha Center in Phnom Penh, contributed to the guidebook, “Understanding Trauma in Cambodia,” and the author of “Past and the Present of Forced Marriage Survivors: Experience toward Healing.”