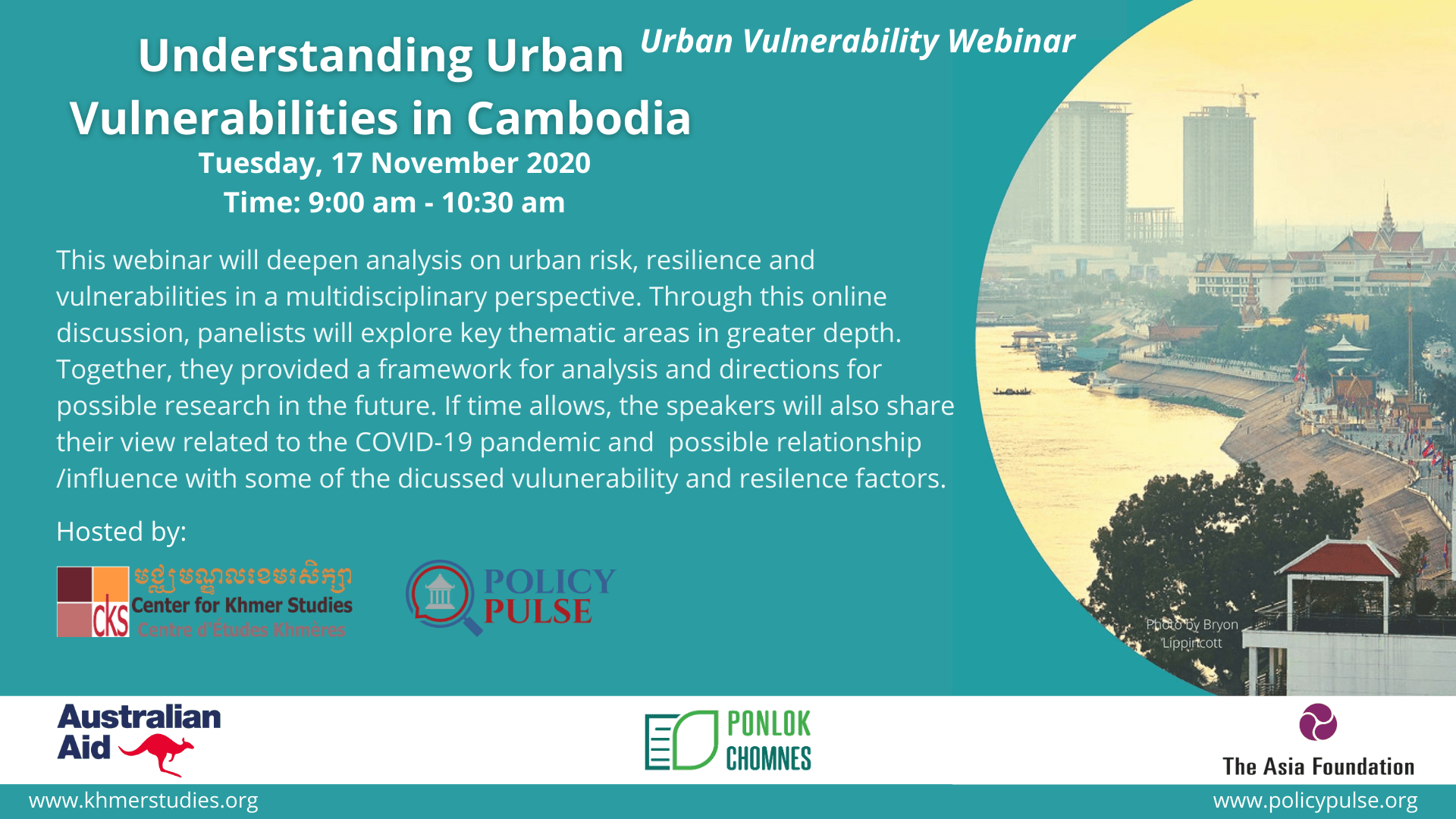 The Center for Khmer Studies (CKS) and The Asia Foundation are co-organizing a virtual talk on “Urban Vulnerabilities in Cambodia”​ on Tuesday, 17 November 2020 between 9.00 a.m. and 10.30 a.m.

Through this online discussion, panelists will explore four key thematic areas in greater depth. Together, they will provide a framework for analysis and directions for possible research in the future.

By covering these four areas, this webinar wishes to provide a multi-dimensional and multi-scale approach to urban vulnerabilities in Cambodia. If time allows, the speakers will also share their views related to the COVID-19 pandemic and possible relationship/influence with some of the discussed vulnerability and resilience factors.

The guest speakers and moderators in this talk include:

ABOUT THE PANELISTS AND MODERATORS

Participants will be required to access the internet to join this virtual Urban Vulnerabilities talk, which will be conducted through Zoom. Invite link to the event will be shared with participants in the invitation letter/email. Participants were required to register before the event.

The Center for Khmer Studies (CKS)

The Center for Khmer Studies facilitates research, knowledge sharing, and insights on topics related to Cambodia’s social, economic, and cultural development. CKS also aims to strengthen research and teaching capacities in the social sciences and humanities as they relate to Cambodia and South East Asia by working with social scientists, sociologists, urban scientists, anthropologists, economists, geographers, political scientists, and others. The institution partners with all major public universities in Cambodia, key development organizations, and relevant public ministries/authorities, and work closely with leading universities and research centers across the US, Europe, and Southeast Asia.

In partnership with Australia’s Department of Foreign Affairs and Trade, The Asia Foundation is implementing Ponlok Chomnes: Data and Dialogue for Development in Cambodia—a three-year initiative (2019-2022)—to strengthen the capacity of knowledge sector institutions to undertake quality research that informs public policy analysis and dialogue in Cambodia.

Subscribe to our newsletter for CKS news and updates.