The Meanings and Importance of the Khmer Zero 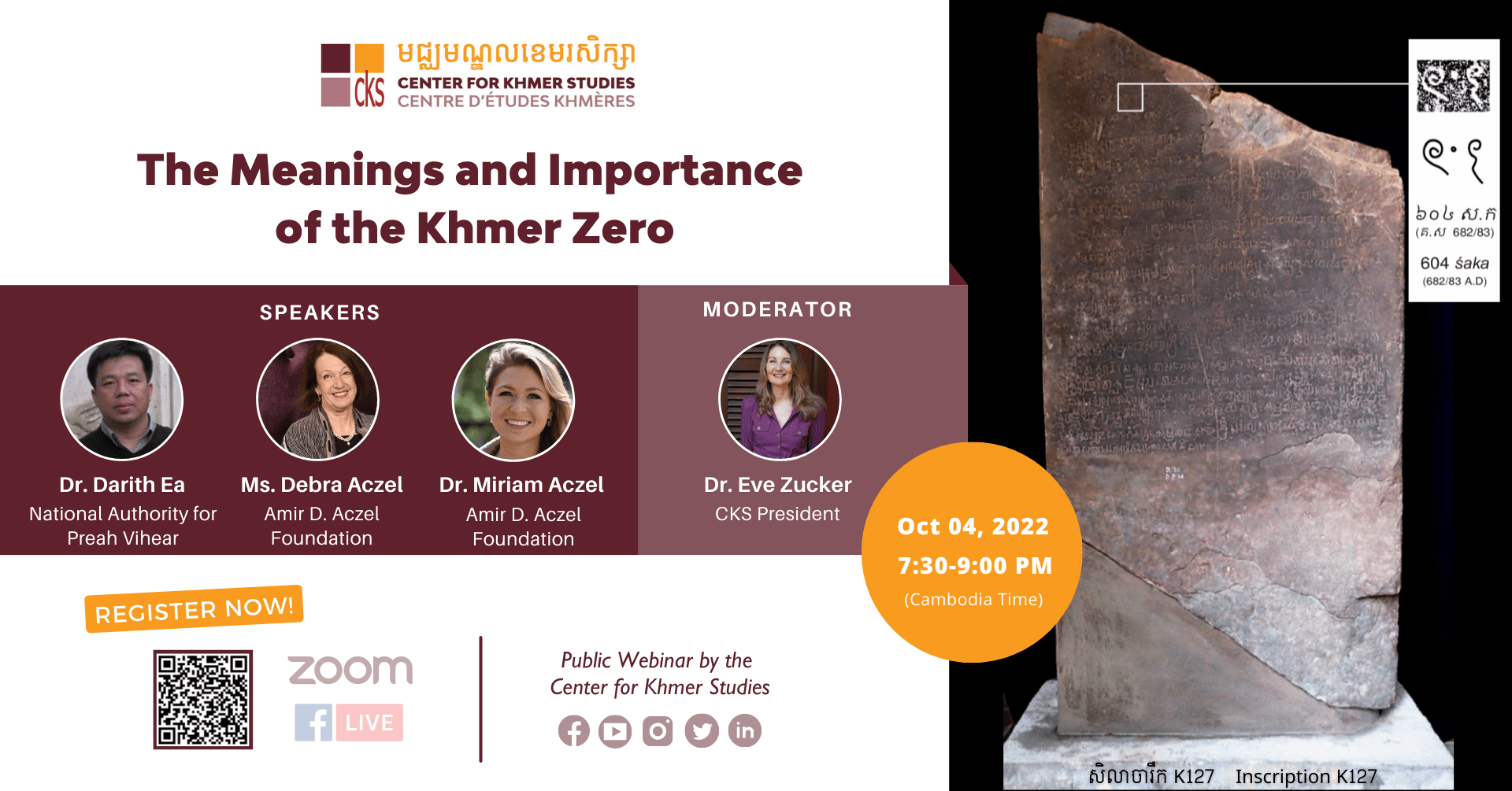 This webinar will briefly discuss the history of the number zero inscribed on an ancient stele in Cambodia—arguably the oldest representation of zero ever found and dated definitively. This use of zero, which dates to 605 of the Chaka eras or 687 CE, was originally found in a temple within the Trepang Prei archaeological site in the 19th century. Georges Cœdès  translated the stele in 1931 from the ancient Khmer and labeled it K127. Although thought lost or destroyed during the reign of the Khmer Rouge, the stele containing the zero was rediscovered through the research of Amir D. Aczel, and is now displayed in the National Museum of Cambodia, Phnom Penh. We will discuss why this discovery of zero is important within the history of mathematics, as well as its wider cultural and historical significance, and how the ability to represent and use zero as a numeral led to advanced mathematics. We will also consider how the zero likely developed within the Indianized pre-Khmer civilization and how it may have been important in the subsequent development of advanced astronomical calculations and engineering accomplishments. Finally, we will touch on next steps needed for further research on the Cambodian zero to learn more about its origins, as well as how it relates to other discovered representations of zero.

Dr. Darith Ea received his Bachelor of Arts degree from the Royal University of Fine Arts in Phnom Penh in 1995, his Master’s degree from Kyoto University in 2000, and his Doctoral degree from Osaka Ohtani University in Japan in 2010. From 2000 to June 2021, he has been working at APSARA National Authority, teaching “The History of Khmer Ceramics” at the Royal University of Fine Arts, and teaching “The History of Cambodia and World History” at Pannasastra University. He has coordinated a spectrum of diverse projects between APSARA National Authority and numerous international teams. Darith’s main research interests focus on Khmer stoneware ceramics during the Angkor period from the ninth to fifteenth centuries. He has excavated more than ten stoneware kilns. In 2015, he took over all management of ceramics excavated from the Angkor area. Since July 2021, he has been working at the National Authority for Preah Vihear as Director of the Department of Conservation and Archaeology.

Ms. Debra Aczel has over 45 years of experience in educational program management. She previously worked as the program manager in the Massachusetts Institute of Technology (MIT) Terrascope Program—an interdisciplinary environmental program. She also served as the program manager for the Integrated Studies Program at MIT—a program for first-year university students combining sciences, mathematics and humanities with hands-on experiential learning. She is co-founder and current co-director of the Amir D. Aczel Foundation for Research and Education in Science and Mathematics, which supports projects in Cambodia. The foundation is an outgrowth of the work of her late husband, mathematician Dr. Amir D. Aczel, on the origins of zero in Cambodia. As part of her work with the Foundation, she along with Dr. Miriam Aczel, co-organized a conference on zero in the history of mathematics in Cambodia, with the Royal University of Phnom Penh, and recently co-sponsored a workshop on zero with the Zero Project and Vrije Universiteit, the Netherlands. She holds a B.A. in English (Pitzer College, USA) and a Master’s in Management (Brandeis University, USA). She currently lives in Paris, France.

Dr. Miriam Aczel is a Postdoctoral Scholar at the California Institute for Energy & Environment (CIEE) at UC Berkeley, working on the Oakland EcoBlock community renewable energy microgrid. She is also currently an Honorary Research Associate at the Centre for Environmental Policy, Imperial College London. Miriam holds a PhD (President’s PhD Scholar) and an MSc in Environmental Technology from Imperial College London, and a BA in Geography & Earth Systems Science with minors in Italian and Earth and Planetary Sciences from McGill University, Montreal. She has been a visiting researcher at the Environmental Law Institute in Washington, D.C. and Tsinghua University in Beijing, China. She currently serves on the editorial board of the Journal of Science Policy and Governance (JSPG) and is Director of Scientific Communications for Leaders in Energy, an environmental organization based in Washington, D.C. She is co-founder and co-director of the non-profit Amir D. Aczel Foundation. Miriam loves exploring new places and learning languages. Miriam is a fellow of the UK Royal Society of Arts. She speaks French, Italian, and Hebrew and is studying Spanish.

PrevPreviousPhotography in Cambodia: 1866 to the Present
NextMediation and Remediation of Khmer Traditional Wedding Music and Lakhon Bassac Theatre on Television and Social MediaNext
Top