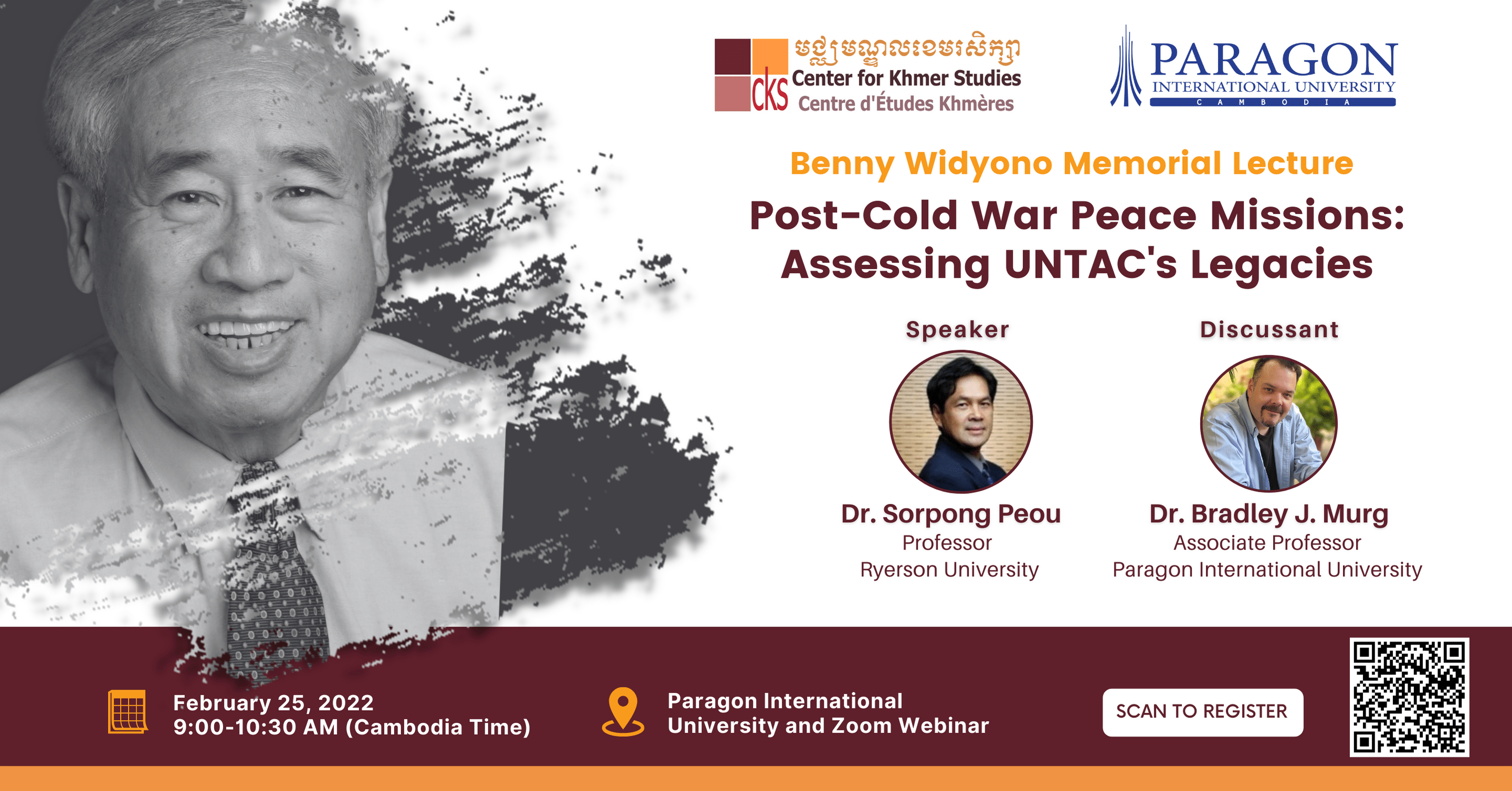 We at CKS are excited to co-host with Paragon University the Benny Widyono Memorial Lecture dedicated to the memory of Dr. Benny Widyono, former head of UNTAC in Siem Reap, UN Secretary General’s Representative in Cambodia, Professor of Economics and Politics, and distinguished Board Member of CKS.

This talk critically evaluates the performance and legacies of UNTAC (United Nations Transitional Authority in Cambodia), the first post-Cold War UN operation that combined peacekeeping and peacebuilding in a country torn by war for two decades. This critical evaluation focuses on how well the mission performed and what its legacies have been. The talk contends that UNTAC’s performance was not as effective as it should have been. It was effective in terms of its ability to repatriate Cambodian refugees and to organize and hold elections. Its failures however include its inability to take control of Cambodia’s administrative structures and to disarm the different political factions. Overall, positive legacies include economic reconstruction and development but they have been overshadowed by the limited success in the process of building political, judicial and legal institutions. Cambodia can no longer be considered a liberal democracy, nor can one conclude that the country’s rule of law has been well developed.

Dr. Sorpong Peou is a Professor of Global Peace and Security Studies in the Department of Politics and Public Administration at Ryerson University in Toronto, Canada. He is a Member of the Eminent Persons Group at the Asian Political and International Studies Association, a Fellow of McLaughlin College, York University, a Distinguished Senior Fellow at the Cambodian Institute for Peace and Cooperation, and a Distinguished Visiting Fellow at the Cambodian Development Research Institute. He has held a variety of fellowships and appointments prior to his current position including President of Science for Peace, based at the University of Toronto; Chair of the Department of Politics and Public Administration, Toronto; Canada-ASEAN Fellow and Fellow at the Institute of Southeast Asian Studies (Singapore).

Dr. Bradley J. Murg is Associate Professor and Provost and Vice-Rector for Academic Affairs at Paragon International University. He also holds positions as Distinguished Senior Research Fellow and Senior Advisor at the Cambodian Institute for Cooperation and Peace; Senior Academic Advisor at Future Forum; and lead editor of the Journal of Greater Mekong Studies. His work, supported by grants from the Social Science Research Council and the International Research and Exchanges Board, focuses on contemporary international relations in Southeast Asia; the politics of foreign aid; and the political economy of the Greater Mekong Subregion as a whole. Dr. Murg graduated Phi Beta Kappa from Emory University with a B.A./M.A. in philosophy, received an M.Sc. in economic history from the London School of Economics, and his M.A. and Ph.D. in political science from the University of Washington. Most recently, he edited the three volume Cambodia 2040 book series – a foresighting analysis of Cambodia’s future development and foreign relations. He regularly writes about Southeast Asian affairs in The Diplomat, Asia Times, Nikkei, and South China Morning Post.