Panel Discussion: Archive and Documentation of the Cambodian Dance 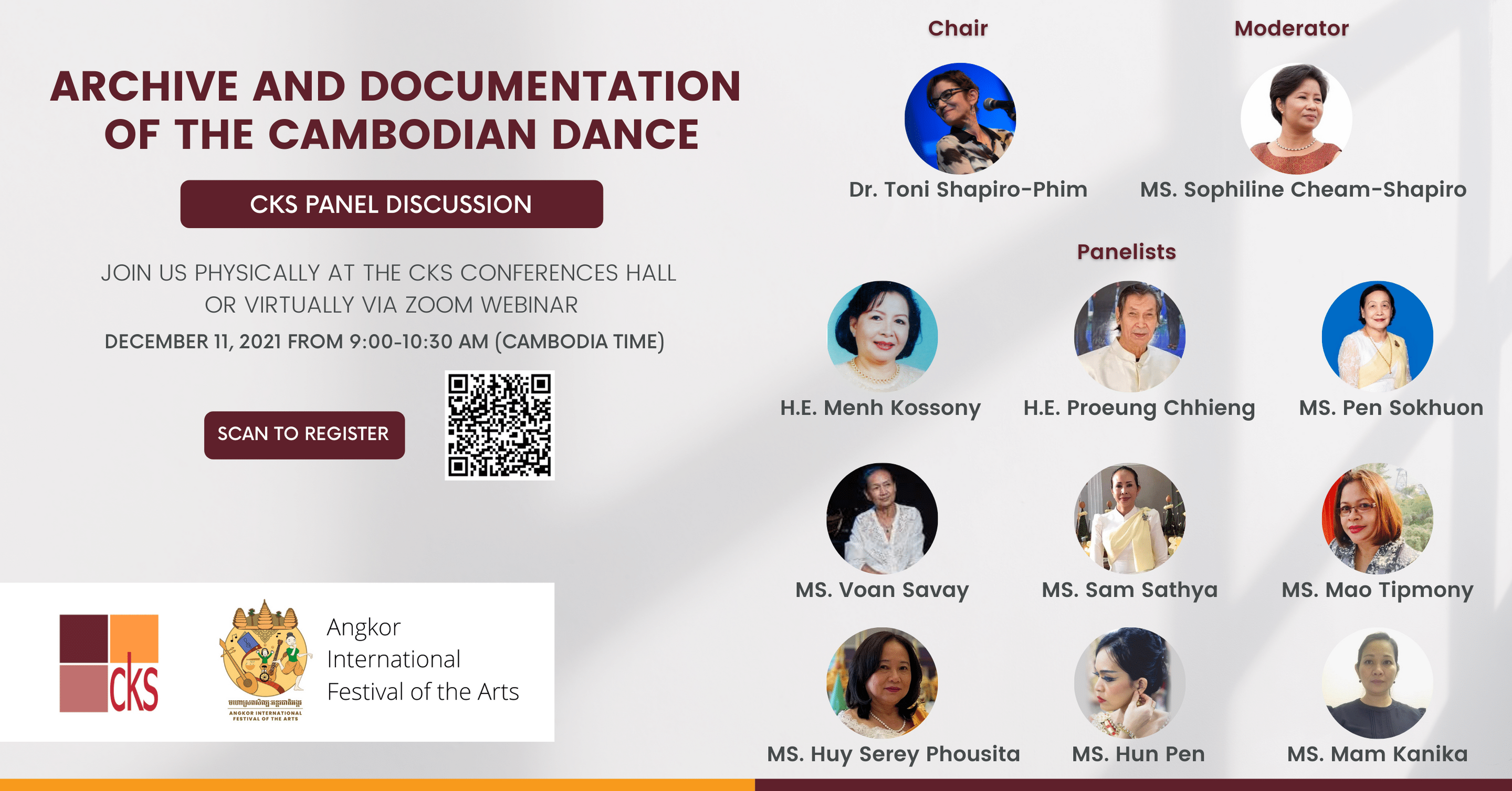 For the past two years, the Ministry of Culture and Fine Arts has spearheaded a classical dance research initiative which includes documentation of movement technique and translation of some seminal texts about Cambodian Dance into Khmer. Alongside these efforts, Dr. Toni Shapiro-Phim’s collection of hundreds of hours of videotaped material of Cambodian dance and dancers from 30 years ago is now being digitized. It will soon be deposited at the Bophana Audiovisual Resource Center and made accessible to the interested public. To ensure that these materials, which document dance training and performance in Site 2 Displaced Persons Camp in 1989 and inside Cambodia in the early 1990s, are as useful as possible to Cambodia’s artists, it has been dancers themselves, including many who appear in the tapes, who have been watching hours of material, developing related explanatory notes, and making concrete plans for use of the tapes for education and research. This panel will feature the perspectives of several generations of Cambodian choreographers, performers, and teachers, as they reflect on this videotape preservation project and the content of the tapes. The discussion will also cover Cambodia’s enormous losses to its cultural heritage and cultural continuity during years of war and genocide in the late 20th century, and the tireless work of surviving dancers (post-genocide) to recreate as much of the repertoire as they could, some of which is captured in these tapes.

Dr. Toni Shapiro-Phim is a dance ethnologist and cultural anthropologist. She conducted dissertation research in Cambodia from 1990-1992, and in Site 2 Displaced Persons Camp in 1989, and received her Ph.D, writing about dance and war in Cambodia, from Cornell University. Currently Associate Professor of Creativity, the Arts, and Social Transformation at Brandeis University (USA), she situated her community work, research, writing and teaching at the nexus of the arts and social justice and human rights concerns. She is also a director of the global Program in Peacebuilding and the Arts.

H.E. Menh Kossony was a principal dancer with the Royal Ballet of Cambodia and performed around the globe throughout the 1960s and early 1970s. As soon as The School of Fine Arts reopened following the fall of the Khmer Rouge, she joined it as a chief instructor of the female character in classical dance. She taught at the Choreographic Arts faculty of the Royal University of Fine Arts from 1995 to 1998, then served as Director General of Cultural Technique between 1999-2007. In 2008, she was promoted to be a Secretary of State of the Ministry of Culture and Fine Arts. H.E. Minh Kossony was honored as a Legendary Artist in Arts and Culture by the Ministry of Culture and Fine Arts and by the Royal Academy of Cambodia.

H.E. Proeung Chhieng was renowned as a dancer of the monkey role in classical dance in the 1960s and early 1970s. After the Khmer Rouge fell, Proeung Chhieng became Dean of the Faculty of Choreographic Arts at the University of Fine Arts overseeing dance, theater and circus programs. He also led dance tours of university artists and of the Royal Ballet of Cambodia, alongside Princess Norodom Buppha Devi, to numerous countries. H.E. Proeung Chhieng is currently an Advisor to the Ministry of Culture.

MS. Pen Sokhuon was a principal dancer with the Royal Ballet of Cambodia and performed in numerous countries during the 1960s and early 1970s. She has been a dance instructor at the School of Fine Arts, director of the dance school and, since 2011, an assistant advisor on classical dance to the Ministry of Culture. She has played a crucial role as a chief dance master of the male character of the Royal Ballet of Cambodia after it was reestablished by Princess Norodom Buppha Devi in 1993. Sokhuon was honored as a Legendary Artist in Arts and Culture by the Ministry of Culture and Fine Arts and by the Royal Academy of Cambodia.

MS. Voan Savay was a star dancer both with the royal troupe in the 1960s, and during the years of the Khmer Republic (1970-75), especially celebrated for her performances in the Apsara dance. A survivor of the Khmer Rouge regime, Savay danced again in Phnom Penh before leaving for refugee camps along the Thai-Cambodian border where she lived and taught dance for more than 10 years. Upon repatriation to Cambodia in the early 1990s, she began teaching in her homeland. She has been teaching in Cambodia and in France over the past decades.

MS. Sam Sathya was a classical dance teacher at the School of Fine Arts from 1989 to 2013. As a principal dancer of the school’s performance ensemble and of the Royal Ballet of Cambodia in the 1990s and 2000s, she performed in major cultural events in Cambodia and toured internationally. Over the years, Sathya also taught at the Faculty of Choreographic Arts of the Royal University of Fine Arts and, in 2017, the Ministry of Culture and Fine Arts appointed her to be Vice Dean of that faculty.

MS. Mao Tipmony began her training in Khmer classical dance in 1980 at the School of Fine Arts. She performed in major cultural events in Cambodia and toured many countries in Asia, Europe, and North America. She served as a dance instructor from 1991 to 2013 before being appointed to be head of the classical dance section in 2014, and later Director of the Dance School within the Secondary School of Fine Arts.

MS. Huy Serey Phousita was born in Phnom Penh. She returned there after the end of the Khmer Rouge regime where she auditioned and was accepted to study female roles in classical dance at the School of Fine Arts. As a performing artist, she toured Vietnam, North and South Korea, Japan, the United States, Laos, Thailand, and India. In 1996, Phousita moved to the United States. As artistic director of Angkor Dance Troupe, based in Lowell, Massachusetts, USA, she teaches classical Khmer dance and also choreographs new pieces.

MS. Mam Kanika studied classical dance at the School of Fine Arts from 1981 to 1989. She taught dance there until 1993, and performed in China, Japan, and Singapore. Kanika was one of those selected to accompany Prince Norodom Sihanouk on his first tour abroad after his return to Cambodia in 1991. In 1994 Kanika moved to France. There, she taught at the Paris Conservatory 11 and toured as a dancer throughout Belgium, Germany and Switzerland. She currently teaches dance in Logn, just outside of Paris.

MS. Hun Pen began her training in classical dance in Phnom Penh in 1990. She is a researcher, professional classical and contemporary dancer, and a choreographer. In 2002-2003 she studied at Wesleyan University in Connecticut, USA, and in 2003 she obtained a BA in choreography from the Royal University of Fine Arts. In the following year, she studied ballet, modern dance, jazz, African dance and contemporary dance and arts management in Paris. In 2008, Pen obtained her Master’s degree in Southeast Asian Studies at Chulalongkorn University. She is currently Deputy Director of the Department of Performing Arts, Ministry of Culture.

MS. Sophiline Cheam-Shapiro began her training in Khmer classical dance’s female, male, and giant roles in 1981 at the School of Fine Arts. She served as an instructor and performer there from 1988 to 1991, when she migrated to the United States. In the U.S., she studied dance ethnology at UCLA and co-founded the dance organization Khmer Arts Academy. In 2006, she returned fulltime to Cambodia, where she founded the independent classical dance company Sophiline Arts Ensemble (Khmer Arts Ensemble). She is the choreographer and director of many dance works that have toured throughout four continents.