Innovation Within Heritage: The Connections Between Cambodian Dance Preservation and Development 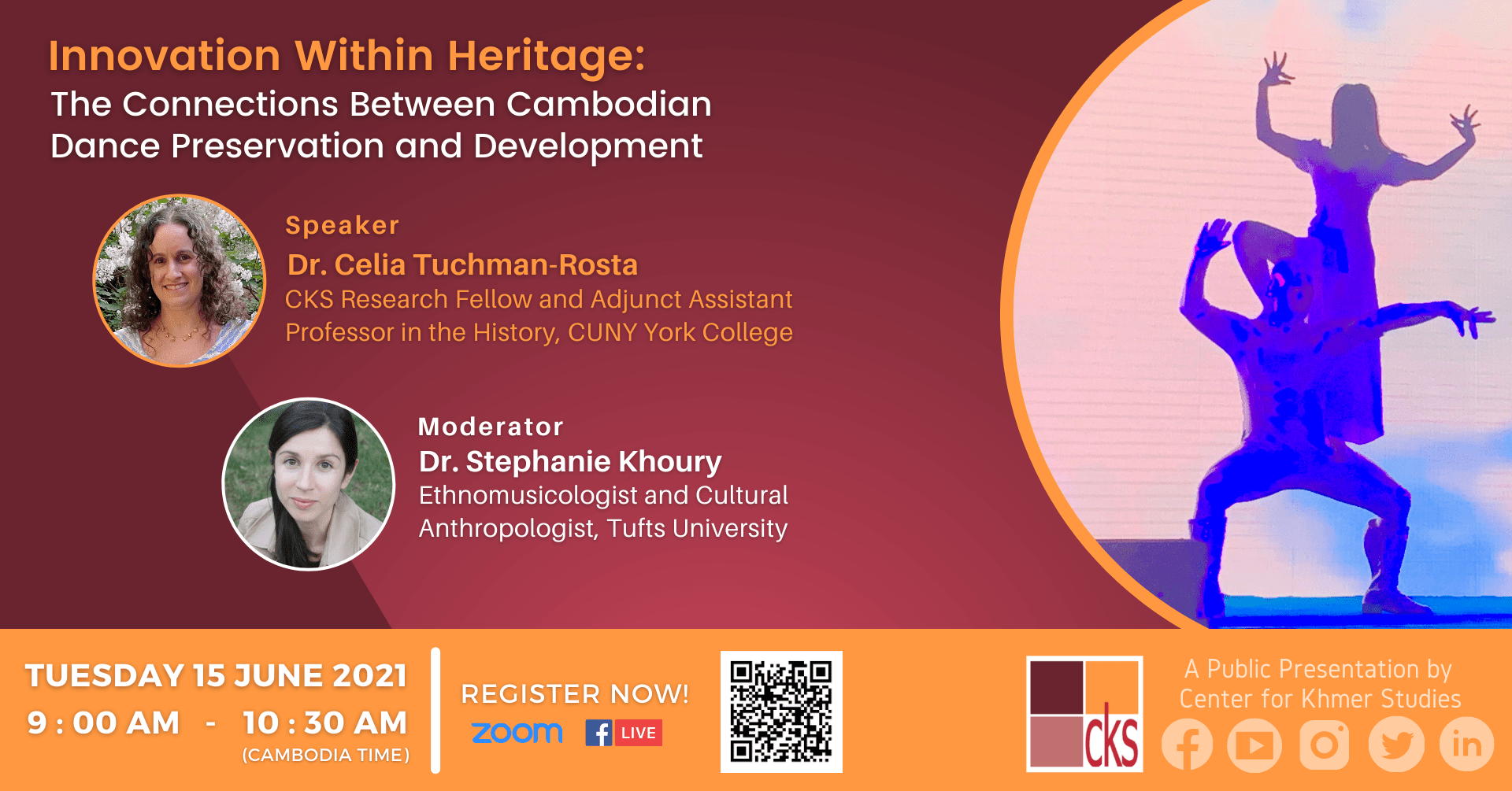 Decades after the Khmer Rouge attempted to eradicate Cambodia’s traditional performing arts practices, arts revitalization remains a symbol of resilience in the country and has become a potential avenue for growth. Classical dance, shadow puppet theater, chapei dang veng, and recently, the all-male masked dance drama lakhon khol have been recognized by UNESCO as part of Cambodia’s intangible cultural heritage. This recognition has shaped the trajectory of arts development in Cambodia over the past two decades. Using ethnographic data collected from 2011-2012 and 2019-2020, this webinar focuses on dance performance to explore changing perspectives on the use of intangible heritage for artistic innovation. In the earlier period, many artists and officials remained concentrated on the preservation of artistic traditions. Eight years later, there was a substantial shift in the discourse toward an increased focus on development—particularly on innovation within Cambodia’s pre-existing artistic heritage (that is, innovation within preservation). These shifting views prompt the following questions: What does it mean to “innovate inside of tradition”? How do artists use tradition to inspire growth and creativity in the arts?

Speaker: Dr. Celia Tuchman-Rosta is a senior research fellow at the Center for Khmer Studies and an adjunct assistant professor in the History, Philosophy and Anthropology Department at CUNY York College. She completed her PhD in cultural anthropology at the University of California, Riverside in 2018. Her work investigates the effects of tourism, national policy, and discourses of intangible heritage on the creative and economic development of classical Cambodian dance. Her research has been supported by the Center for Khmer Studies and the Fulbright Program. Celia’s work has been published in Economic Anthropology and The Asian Theater Journal. She is currently working on an edited volume focused on Cambodia’s intangible heritage with Dr. Stephanie Khoury as well as a project on the impacts that the COVID-19 pandemic has had on tourism in the Southeast Asian region.

Moderator: Dr. Stephanie Khoury is an ethnomusicologist and cultural anthropologist based at Tufts University in the United States. Stephanie’s work examines performing arts practices through the interrelated frameworks of religion, collective memory, social justice, the concept of intangible heritage, and the notion of a globalized space for performance. For that, her research focuses on Cambodian pinpeat music and performing arts, notably the lakhon khol, in Cambodia. Her research on the rural practice of this all-male theatre has been supported by doctoral fellowships from the Florence Gould Foundation and the Center for Khmer Studies in Cambodia as well as from the Quai Branly Museum in France.

In 2016, Stephanie received a postdoctoral fellowship from the Laboratory of Excellence Creation, Arts and Heritage (LabEx CAP) at the Sorbonne University to explore the influences of artists’ environments and histories on their performing arts. This idea was further developed with Dr. Celia Tuchman-Rosta, a collaboration that has grown into an edited volume project.

Now based in the United States, Stephanie also conducts research with Cambodian diasporic communities, notably in New England, where she is currently leading a collaborative community-based research project on the role of pop music in knowledge transmission among three generations of Cambodian Americans living in the Greater Boston area –a project funded by the Tisch College of Civic Life at Tufts University.